​Sizzl'
This work was commissioned and premiered by Ilan Morgenstern and Christopher Wills in the Spring of 2009.   It is intensely virtuosic throughout and is meant to depict a driving, breathless, frenzied state that is “too hot to handle.”  Even the slower middle section of the piece is extremely intense, much as the deliberately precise movements of a tango evoke a sense of dangerous static electricity.  In the concluding section the performers are directed to play “as fast as possible;” the heading over the first measure completes the truncated title, and reads “…n’ Hot!”.  Sizzl' is available for purchase from Cimarron Music .

The Kraken’s One Day is as Another

The Kraken was the mythical poly-tentacled sea-monster that, if only mentioned in a whisper, would instantly spread terror across the decks of any passing sailing vessel.  One may envision the beast slumbering for years in the uncharted depths of the ocean, twitching at various irritations such as distant glints of sunlight or muffled canon fire from the world above, but never quite finding the resolve to awake with any sense of purpose.  However, on that rare day where hunger and the corresponding desire to hunt collide, the beast raises furiously from the depths to wreak its havoc upon men.  Sail, rope, wood, and flesh are smashed and ripped beneath the enormous weight of the enraged creature’s slithering arms and oozing body; its only purpose being, it would seem, to exact revenge on God’s more lovely creatures for their apparent perfection and favor in the sight of the Almighty.  The Kraken's One Day is as Another is available for purchase from Cimarron Music.

Withering Grass is loosely based on the concept of the isorhythmic motet, where a color (pitch pattern) and talea (rhythmic pattern) loop at varying rates and meet together at the end of the piece.  In this case, my concern was more with the color, represented here by a falling series of arpeggios.  The arpeggios symbolize the various stages of life from infancy (a single note starts the series) to old age (an extended arpeggio slowly crawls across the entire range of the keyboard).  The title is derived from Isaiah 40: 6-8, “The voice said, Cry.  And he said, What shall I cry?  All flesh is grass, and all the goodliness thereof is as the flower of the field: The grass withereth, the flower fadeth: because the spirit of the Lord bloweth upon it: surely the people is grass.  The grass withereth, the flower fadeth: but the word of our God shall stand for ever.” This piece was written in loving memory of Mabel Coulson Fry, 1908-2006.

Mazing was written specifically for bass trombonist Ilan Morgenstern and is a companion-piece to Sizzl’.   Both works are extremely virtuosic, and in their execution the performer is called upon to exhibit a certain air of poise and coolness, (in the modern parlance this might be translated as “attitude”), under pressure.  The title refers both to the way the music weaves in and out of various registers and styles, as if following a wild and erratic labyrinth, or maze, and to the fact that the abilities required of the performer are in a word: “Amazing"

Sarabande
In 2010, shortly after John Mireles commissioned me to write Ex Nihilo for solo trombone and trombone quartet, he came to me for a Masters Recital work.  His only request was that the piece be beautiful, easy to listen to; a pleasant respite amongst an otherwise dark and heavy recital.  Although I typically don’t try to directly emulate any one composer, my mind immediately shifted towards the textures and timbres of Ravel; specifically the second movement of his Piano Concerto in G.  I wrote Sarabande as an aria, allowing the lyrical potential of the trombone to take its full course.  John Mireles premiered this work in 2010, and Scott Klingbeil recorded it in 2011.  Sarabande is avaiaible for purchase from Cimarron Music.

Concerto For Bass Trombone and Band

My first wish for this concerto is that it would be taken seriously as a genuine addition to the standard bass trombone and tuba repertoire.  This is why the solo part requires a considerable degree of virtuosity from its performer.  It is also the reason behind my opting for the traditional 3-movement scheme of the classical concerto, rather than choosing a shorter 1-movement form.  I don’t believe that the piece lacks, in its components at least, any degree of sophistication or intellectual depth.

My second wish, however, is that this piece would not be taken too seriously.  In typical band and wind ensemble tradition, I want this piece to be appreciated by a wide audience, and I feel that the best way to do this is to incorporate humor into my work.

The first movement, for instance, is entitled “Four-inch Heels,” and the performance marking simply indicates that it is to be “flamboyant.”  In this movement I imagine a dance that is on the one hand intriguing and perhaps even seductive, while at the same time fringing on the ridiculous.  The lone dancer, as I envision her, doesn’t seem to care about what other people think, and apparently only wants to be taken seriously as a dancer.  She carries on with a sense of panache, or “flare,” that leaves us wondering what is really going on inside her mind; such paradoxes are intriguing, are they not?

The second movement, “And Once Gone…,” is meant to counterbalance the first and third movements in that it veers towards a more heartfelt and introspective manner.  The music evokes a feeling of loss; an emptiness felt perhaps even long after the actual loss occurred.  Throughout this movement the relatively thin orchestration depends heavily on gentle “splashes” of color from the various instrumental families.

The final movement, “Don’t Anger the Sacred Temple Gibbon,” turns us once again towards the bizarre.  To be honest, my inspiration for this movement came from King Louie, the orangutan, in Disney’s Jungle Book.  Here we see a temple, all but swallowed up by the jungle that surrounds it.  Vines crawl over shrines and altars, and various creatures creep in, out, and between the remains of sacred vessels.   In the place of honor, where worshippers once directed their prayers, a living gibbon sprawls out irreverently on the pedestal previously occupied by some crumbled or dismantled idol.  He is asleep, and obviously is not worried about any challenge to his “authority.”  But the question burns in your mind: is this just some animal or, given his apparent aloofness, could this be a manifestation of something from the supernatural realm?  As you move closer, almost sensing that he can see your every move through closed eyelids, the answer to that question becomes more and more elusive.  Your heart pounds, and sweat beads across your forehead; you can only wonder if you are venturing too close to something darker than what you bargained for, something that ought not to be disturbed.

Concerto For Bass Trombone and Band as well as a piano reduction of the work are available for purchase from Cimarron Music.

Check out my Bio 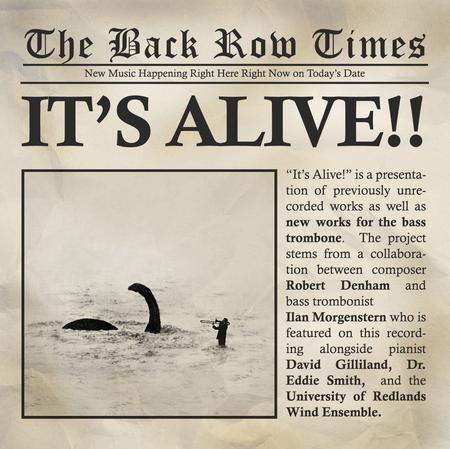 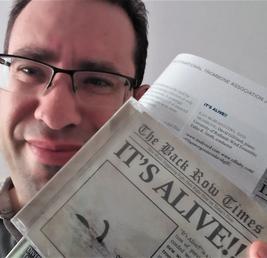 ​​​​There are very few sounds in my mind that reoccur over and over. As a musician, I want the most beautiful sound to try to imitate – Ilan now has one of those sounds in my mind. Everything from his technical virtuosity to his slow baritone-like voice on the bass trombone is something to keep in my mind for a long time...Robert Denham’s compositions were able to showcase Ilan’s musicianship at an impeccable level, and I hope to hear more from both these men in the near future. - Jeremy Smith, Last Row Music